Example: How Short is a Straight Line ?

It’s intuitively obvious that the shortest distance between two points on a plane is just a straight line. To demonstrate this mathematically is more tricky.

In words, the procedure goes like this: of all possible curves between the two points, find one (if it exists) which always becomes longer if it is altered in any way. (Thinking physically, if the points were linked by a rubber band, then to disturb it from the shortest curve would require additional energy, no matter what that disturbance looked like). 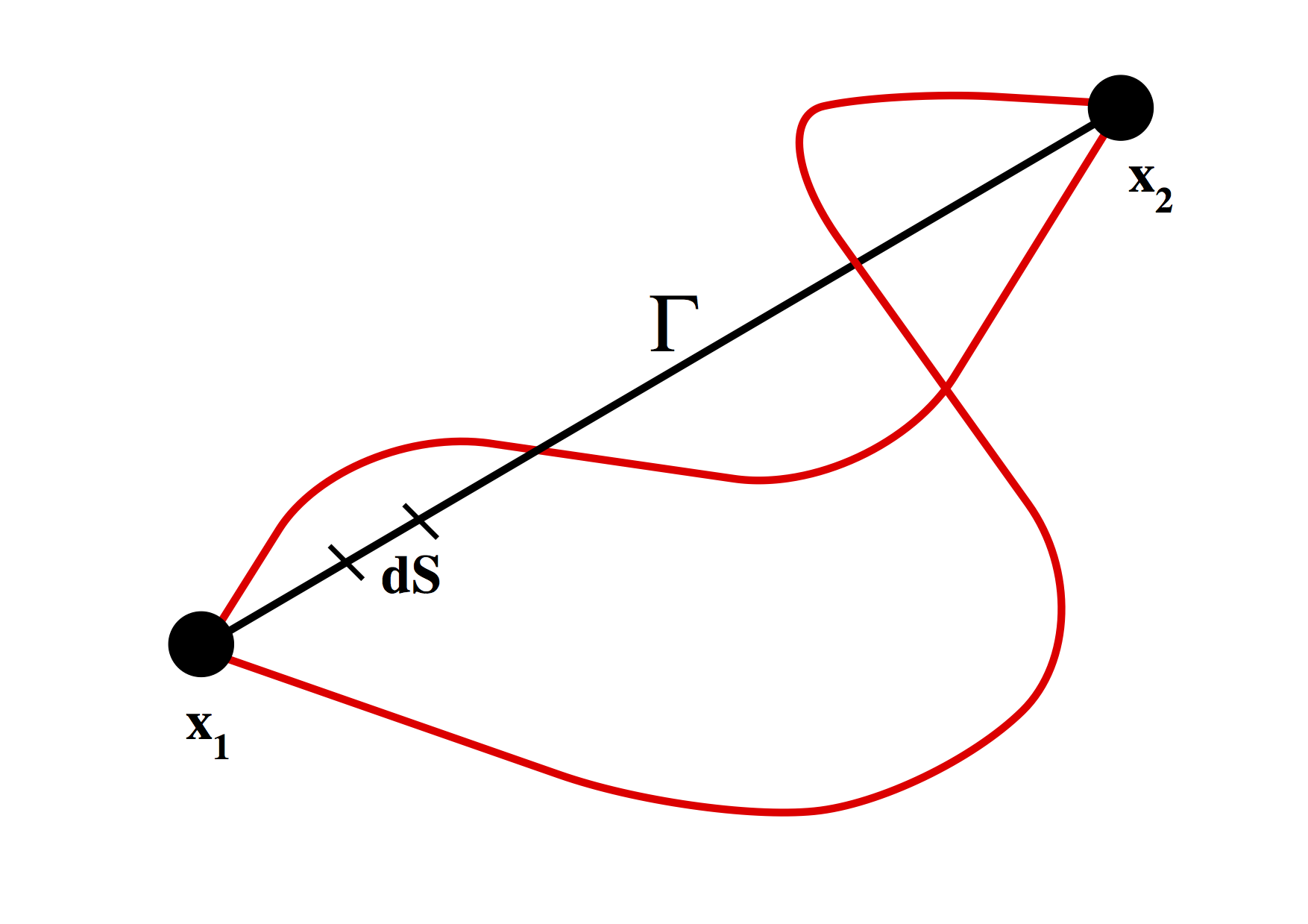 We decide, arbitrarily, that we will make $x$ the independent variable and find a curve $y(x)$ which satisfies the minimum distance requirement.

The important things to note here are that an integral method can be used to solve a simple geometrical problem and that the method itself includes the boundary conditions as a natural consequence of the way it is set up.

The variational method can be generalized to solve more important problems. In particular, instead of solving each problem as we have for the straight line / distance question above, we solve a generic problem whose solutions we can apply immediately.

Application of the Euler equation to each direction independently recovers Newton’s law ($F=ma$). In complex geometries and with difficult boundary conditions, the variational form may be easier to solve than the differential or “strong” form. This shows us that there are equivalent integral representations for the standard mechanical equations we are accustomed to using — variational or weak forms versus differential or strong forms.

Although this may seem complicated and of rather theoretical interest, in fact it runs throughout finite element methods, and the concept must be familiar in order to follow how FEM works. Advantages of using variational forms of the equations include:

Example of Variational Forms for FEM

See Klaus-Jürgen Bathe’s book for a more complete outline of this approach to FEM. Although this is not the best text to explain how to implement a finite element code, he does a great job of explaining the link between variational methods and weak forms of various equations of progressively increasing complexity.

This is a clear demonstration that the standard form of the equations plus certain boundary conditions can be fully wrapped up in integral form and are exactly equivalent to the standard form. The major difficulty is in how we produce the correct functional in the first place, especially if we want to avoid first deriving the differential form of the equations and back-calculating as we done above.

The problem above is simple enough that the integral or differential forms of the equations can be solved directly. In general, however, we anticipate dealing with problems where no closed form of solution exists. Under these circumstances approximate solutions are desirable. In particular, there is a class of approximation methods which use families of trial functions to obtain a best fit approximation to the solution. These naturally develop into finite element algorithms as we shall soon see.

Formulation of a General Problem

Suppose we now search for approximate solutions of the form \[ \begin{equation} \bar{\phi} = \sum_{i=1}^{n} a_i \Phi_i
\end{equation} \] where $\Phi_i$ are linearly independent trial functions and the $a_i$ are the unknown weights for each of the functions.

In weighted residuals methods, the expansion is used directly on the strong form of the equations. $\Phi_i$ are chosen so as to satisfy all boundary conditions and then we seek to minimize a residual \[ \begin{equation} R = f - {\cal{L}}( \sum_{i=1}^{n} a_i \Phi_i ) \end{equation} \]

Minimize the square of the residual with respect to $a_i$ \[ \begin{equation} \frac{\partial}{\partial a_i} \int_\Omega R^2 d\Omega = 0 \;\;\; i = 1,2,\ldots \end{equation} \] This method produces a symmetric coefficient matrix regardless of the properties of the operator.

The Ritz method does not operate on the residual of the strong problem, but minimizes the weak form of the problem with respect to each of the unknown parameters $a_i$ in the usual variational manner. The trial functions no longer need satisfy the natural boundary conditions of the problem as these are wrapped up in the variational form. (Again, see Bathe for discussion and examples).

The Galerkin method can be extended to include a term which minimizes the violation of natural boundary conditions, and thus permits the use of a wider range of trial functions \[ \begin{equation} \int_\Omega N_i R d\Omega + \int_\Gamma N_i R_B d\Gamma = 0 \;\;\; i = 1,2,\ldots \label{eq:galerk1} \end{equation} \]
However, it does not now necessarily produce a symmetric matrix even for a symmetric operator. However, if the equation (\ref{eq:galerk1} ) is integrated once by parts, it yields a symmetric form and also reduces the order of derivatives inside the integral. This means that the trial functions need be of lower order, and it makes the Galerkin formulation equivalent to the Ritz formulation.

Weighted residual formulations have one advantage: they can be used whether or not there exists a functional corresponding to the particular problem. As a result is used this method is used extensively in constructing finite element methods.

The Genesis of a Matrix Method

One of the dominant features of the Finite Element literature is that it is filled with matrix algebra. The fact that differential equations can be rendered into matrices seems at first to be mysterious. However, it results quite naturally from the discretization of the problem, and the parameterization of the discrete equations through a limited set of unknown parameters.

Thus, before getting deeply involved in the arcane lore of Finite Elements, We give one example of a genuinely discrete system and show how it generates a matrix problem quite naturally.

Thus the global equilibrium requirement of \ref{eq:globeq} become \[ \begin{equation} \mathbf{K}\mathbf{U} = \mathbf{R} \end{equation} \] where \[ \begin{equation} \mathbf{K} = \left[ \begin{array}{ccc} (k_1 + k_2 +k_3 + k_4) & -(k_2+k_3) & -k_4
-(k_2+k_3) & (k_2 + k_3+k_4) & -k_5
-k_4 & -k_5 & (k_4 + k_5) \end{array} \right] \end{equation} \] Note, by the way, that $ \mathbf{K}$ is symmetric. An important observation is that \[ \begin{equation} \mathbf{K} = \sum_{i=1}^{5} \mathbf{K}^{(i)} \end{equation} \] The individual element stiffnesses can be summed to form a global stiffness matrix. A symmetric, positive definite matrix problem can be solved in numerous different ways, many of which are easy to look up in textbooks ! A very simple problem like this has captured much of what we need to do in arbitrarily complex finite element computations. The construction of local element equilbrium problems based on the interaction of each available degree of freedom with every other is followed by the assembly into a global problem by summing the contributions of the individual elements.

The degrees of freedom are related by elastic spring constants here. In our more abstract formulations we will replace spring constants by coefficients obtained from the variational method but the form is {\em exactly the same}.